Beer For Everyone In Your Coven

Happy Halloween! Draw the drapes, light the candles, and get ready to—well, watch movies! The most attention your costume will get is on social media this year, so snap your best selfies before cozying up with the spookiest cheeses we’ve got and lining up some Halloween classic movies. We presented beer buyer Brian Cullen with a list of our favorites, and he got right to work choosing the perfect beer for each flick. 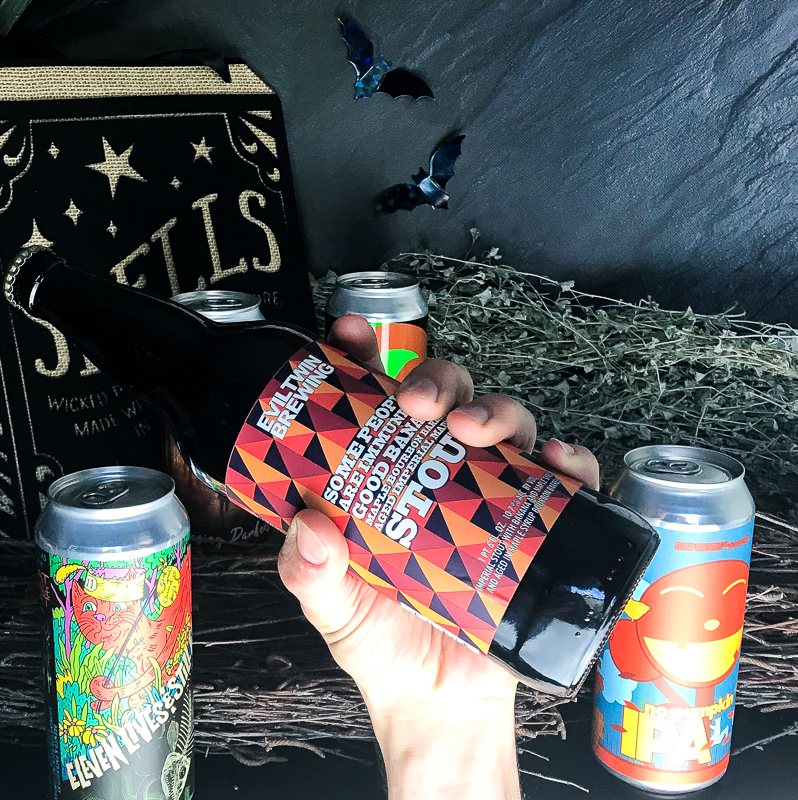 There’s nothing quite like Hocus Pocus. Ostensibly a children’s movie, but would we watch it today? Absolutely, every year. The Sanderson Sisters strike the perfect balance between hilarious and horrifying, with goofy facial expressions that belie their darker intentions. Indulge in your childish side with Omnipollo’s Zelator, a lollipop-flavored tropical IPA that will pair just as well with Halloween candy.

Wes Craven’s Scream might be satirizing slasher flicks, including Wes Craven’s own Nightmare on Elm Street, but this suspenseful gore-fest won its own place in the horror pantheon. You’ll need something hearty to keep you going through Scream’s twists and turns, and Brian thinks Timber Ales’ Chasing Darkness will do the trick. This stout is aged on cassia bark and brewed with vanilla beans, with a luxurious sip that will last you to the end credits.

Few horror movies are as pulse-pounding in their quiet intensity as The Babadook, the psychological horror movie that took the world by storm to become a cultural icon. Just as intense is Evil Twin’s Some People Are Immune To Good Advice. This imperial oatmeal stout is brewed with bourbon barrel aged Michigan maple syrup, making for a rich, malty beer that pours as black as the Babadook’s suit.

Most vampire movies trade in old castles and Victorian fashion, but 1998’s Blade brought a sleek, industrial goth aesthetic to the genre that we’d go on to see in similarly iconic movies like the Matrix. Brian pairs this action-packed film—technically, a superhero movie!—with Eleven Lives & Still Wandering, a collaboration between Abomination Brewing Company and Fat Orange Cat. The name perfectly matches to Blade’s lifelong mission to hunt vampires, and the smooth vanilla flavors in this very solid double IPA match just as well to how well this film holds up, year after year.

While Train To Busan doesn’t technically belong on a list of Halloween movies—there is nothing specifically spooky about it—this is a masterful take on the zombie movie that deserves a spot in your horror lineup. For a beer that’s just as unconventional a Halloween choice, give Sloop Brewing Co’s (No) Pumpkin a try. This fall seasonal beer is a classic IPA that doesn’t rely on pumpkin or warming spices to achieve an autumnal flavor, the same way Train to Busan doesn’t rely on standard zombie movie tropes to evoke true horror, and the can itself will fit right in with your Halloween decor.