Spirited Away: Celebrating Women in Spirits

This one’s for the ladiez…

Our salute to women producers continues this week with a celebration of the “spirited” women behind several of the most exciting spirits on our shelves. Read on, shop online, then raise a glass! 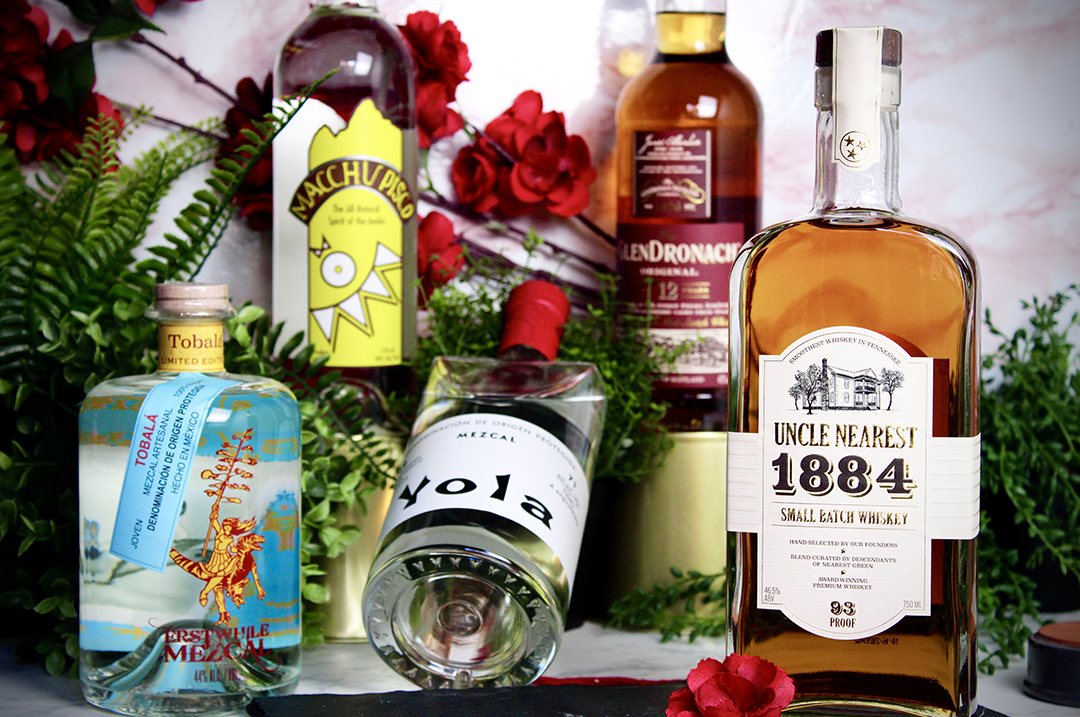 The story of Yola begins with, well Yola. Yolanda Jimenez, that is, whose grandfather bought an agave farm outside of Oaxaca in 1971 and started producing mezcal. Jimenez, the daughter of a lawyer and an academic, grew up in Mexico City, but spent many summers visiting her extended family in Oaxaca. She studied feminist philosophy at Cambridge University, where he was first introduced to the idea that promoting women’s economic independence leads to greater community health and vitality.

When her grandfather fell ill, Jimenez returned to Mexico City, where she opened a bar featuring agave spirits from Oaxaca. It was there that she met Chef Gina Correll Aglietti and singer Lykke Li, and the three became fast friends. When Jimenez’s grandfather died, she inherited the agave farm and soon decided to produce a mezcal using her grandfather’s recipe to honor him, her roots, and the women of the Oaxacan community. Aglietti and Li were excited by the idea, and the rest, as they say, is herstory.

Yola Mezcal is easy drinking and delicious, with a floral, perfumed nose leading to perfectly balanced and complex notes of pink peppercorn, juniper, sagebrush and citrus oil flecked with tangy passion fruit. Herbaceous and smooth this is the perfect mezcal to sip over ice or incorporate into your favorite Summertime cocktail.

Erstwhile (based in Brooklyn, NY)  is the efforts of Yuan Ji and Kevin J. Brown. Yi was an anti-trust lawyer and Kevin was a dealer of antique maps. They started Erstwhile as a way to work ethically with the spirit that they fell in love with. Working with exclusively local families in Oaxaca as partners, not employees, offering them ownership and autonomy of their process and product. Their business model is one dedicated to full transparency, commitment to bettering the communities they work with and sustainability. They are dedicated to the education and representation of women in the mezcal industry.  Each bottle is the effort of small local families working with the land and traditions that speak to them. This is a female-run and owned business that delivers on its mission statement to create opportunity and economic security for the local families that make this mezcal so unique and complex.

Erstwhile Tobala is an easy sipper, rounder and sweeter than other varietals this mezcal offers up adobo and baked maguey on the nose, notes of quince and vanilla balance subtle smokiness with a lingering caramel and hot smoke finish.

Hendrick’s Gin: She Blinded Them With Science

Launched in 1999, with its distinctive flavors, Hendrick’s Gin started out as a cult fave before becoming the massively popular powerhouse it is today. From the very beginning, Lesley Gracie has been the master distiller. A chemist by trade, she created Hendrick’s as a challenge from the late former CEO of Scotland’s William Grant & Sons to create a new kind of gin that would be unlike anything currently on the market.

Hendrick’s Gin is infused with Bulgarian Rosa Damascena and carefully selected cucumbers from only the best producers. Distilled in Ayrshire, Scotland, Hendrick's is infused with coriander, citrus peel, rose petals and cucumber giving it an incredibly unique taste and unparalleled smoothness. Despite its massive audience, Hendrick’s remains handcrafted in small batches (only 500 liters at a time) to give Gracie complete control of her craft. Hendrick’s uses two different spirits from rare stills, the Bennett and Carter-Head. The Bennet steeps the botanicals in spirit overnight prior to distillation and the Carter-Head gently steams the botanicals, this bizarre method makes for an unbelievably nuanced and delicate gin that still retains a strong personality. Gracie has said that gin is so wonderful because there is “endless potential” for flavor, and her signature gin continues to intrigue and delight drinkers and bartenders alike.

Macchu Pisco: A Taste of Peru in Every Sip

Macchu Pisco was founded in 2006 by sisters Melanie and Lizzie Asher with the sole ambition of sharing the flavorful traditions of Peru with the US, Europe, and beyond. Pisco is technically a type of brandy produced in Peru and Chile (there’s controversy over which nation invented it). It is distilled from fermented grape juice into a high-proof spirit. Pisco was first documented in the 16th century by European explorers, but there is evidence that it is much older, and made its way to the US around the Gold Rush era of the nineteenth century. The Asher sisters are part of Pisco’s new wave; they have cited their grandmother as a major source of inspiration, who re-entered the workforce at age 65 as a saleswoman and taught them everything they know about how to be entrepreneurs and how to hustle!

Macchu Pisco is from 100% Quebranta grapes and produced naturally this spirit is characterized by herbal, grassy, and earthy notes. In Peru, the Ashers work with a co-op of women farmers and coordinate their efforts with Coprodeli, an organization helping women and children in the Ica region where they produce their Pisco, recruiting women to work as grape pickers. Each batch rests for 1 year before being bottled at the estate and can be enjoyed on it’s own as an aperitivo or in an array of refreshing cocktails.

Uncle Nearest has burst onto the whiskey scene in a really exciting way, and it’s thanks to the efforts of the Fawn Weaver (CEO and Co-founder) that most of us know this name at all. The brand is named for Nathan “Uncle Nearest” Green, a former slave who grew to become Tennessee's premiere master distiller in the years leading up to and following the Civil War, and who is credited with teaching Jack Daniels himself how to make whiskey.

According to legend, Green was first a slave and then an employee of Reverend Dan Call, a Lutheran preacher in Lincoln County, Tennessee, who operated one of the finest local whiskey stills just down the road a ways behind his farmhouse, thanks to Uncle Nearest and his unique method of charcoal filtering that he had learned back home in West Africa. Eventually, Call’s congregants complained that a man of God shouldn’t indulge in an unholy enterprise like making hooch, and eventually he sold the farm, along with its popular whiskey operation, to a young farmhand named Jasper “Jack” Daniels, who hired Nathan Green as his very first the master distiller and operator of the most sought after still in the area. Green’s method of filtering whiskey through sugar maple tree charcoal became known as the Lincoln County Process and is still used today to make Tennessee whiskey.

Uncle Nearest 1884 Tennessee Whiskey, lauded as one of the best whiskies in 2020 and helmed by Master Distiller of the Year Victoria Eady Butler, serves aromatic waves of freshly churned butter and honeyed toast. On the palate, it is smooth and dry, flecked with smoke and vanilla. Everything about this whiskey is warm and comforting, an unparalleled addition to any whiskey lover's shelf.

GlenDronach & BenRiach: Spicing Up the Speyside

Tucked away in the Valley of Forgue, deep in the East Highland Hills of Scotland, lies The Glendronach, one of the oldest distilleries in the region. Known for creating some of the finest richly sherried single malts, we also think of them as legendary for another reason. Amidst the notable ‘boy’s club’ of the whiskey and scotch world, Rachel Barrie stands proudly as the Master Distiller for GlenDronach and BenRiach. Barrie has always been in love with science. She grew up writing science-fiction stories in Aberdeenshire, Scotland, fascinated by the wild imagination that fueled stories of what could be. She studied chemistry at Edinburgh University, letting that passion for possibility help her grow into one of the best Scotch whisky blenders in the world. During her nearly 30-year career in the business, she’s tasted over 150,000 barrels, speaking “of them as if they were precious family members who grew up and entered the world,” according to a 2018 Daily Beast article by Heather Greene. “Everything goes into them and becomes your heart and soul,” she said. Barrie works with each individual distilleries landscape (though each one is only 20-30 miles apart there is a surprising variety of elements) and specific climate to create the best possible product, perfectly harmonizing tradition and innovation.

BenRiach ‘The Smoky Twelve’ was fashioned to showcase the usage of eclectic casks from around the world. aged for 12 years in a combination of bourbon, sherry and marsala casks, the peatiness is complemented by dried fruits and vanilla and a rich fruit based sweetness from the marsala casks. On the palate this whiskey feels creamy and smooth, but has plenty of sweetness, spice and smoke to offer. Delicious, savoury, warmly spiced and a pleasant sweetness make this a truly exceptional find.

The GlenDronach 12yr Single Malt Scotch Whisky, aged for 12 years in sherry casks, is a rich and creamy Highland Scotch.  The flavor profile is dominated by notes of fruits, nuts and spice.  You will not find much smoke here.  Notes of berries, dried raisins, baking spice and hints of citrus and vanilla.  Delicious and a bit decadent.

Master Distiller Morgan McLachlan grew up in Canada, where she spent hours in the woods near her home in the nation’s Pacific Northwest, fostering a lifelong passion for nature. She moved to California as an adult, where she worked as a camera operator in the film industry for over 10 years. McLachlan remained fascinated with botany, and she eventually set her sights on a new career distilling craft spirits. McLachlan has made a name for herself as an “avant-garde distiller,” with her innovative methods and focus on botanical-based spirits and fruit distillates. In 2012, she co-founded The Spirit Guild, one of L.A.’s first craft distilleries.

Amass Dry Gin is part of a line of modern classic gins inspired by the City of Angels. Distilled with 29 botanicals, including California Bay, Cascara Sagrada, grapefruit, Reishi and Lion’s Mane Mushroom, Hibiscus, Cardamom, and of course, juniper, Amass is a celebration of the natural terroir and cultural landscape of contemporary L.A. Indigenous botanicals like California Bay and Cascara Sagrada ground bright top notes of fresh citrus.