Slainte! A Guide To Irish Whiskey

Erin go bragh! Or at least, Erin go for a drink. Long before Guinness brewed its first batch of highly distinctive stout, the people of Ireland were sipping uisge beatha,  the “water of life.” Just in time for Saint Patrick’s Day, we’ve put together our own guide Irish whiskey so you can sip and celebrate in style. 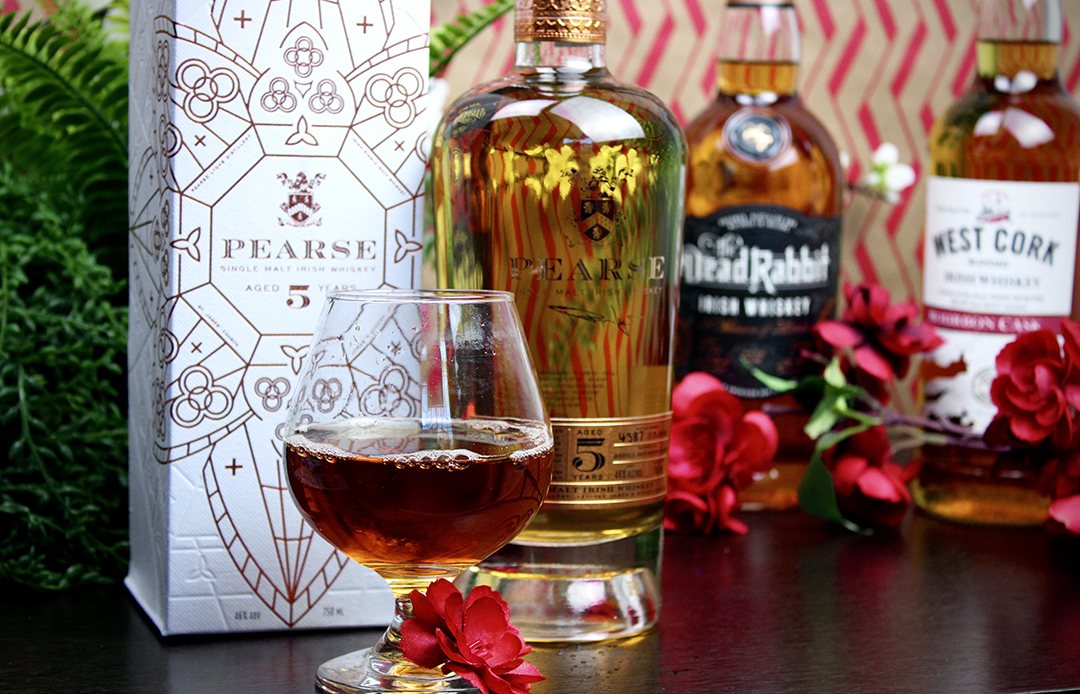 So, what is Irish whiskey? According to legend, monks brought the craft of brewing and distilling to Ireland in around 1000 B.C.E., after proselytizing and what not in the Mediterranean and the Middle East. They originally used the techniques to distill perfumes, but after a few years, they figured out how to put their craft to more flavorful use. The rest, as they say, is history.

Irish whiskey typically uses a combination of malted and unmalted barley, and water. In contrast, Scotch is almost always made from malted barley, while American whiskeys such as bourbon are made with a mixture of barley, wheat, and corn. The other notable difference between Irish whiskey and other types is that while bourbon and Scotch are usually distilled twice, Irish whiskey is almost always triple distilled. The more distillations the cleaner and lighter the spirit, hence Irish whiskey’s notably light and smooth profile. You can drink it any darn way you please, but conventional wisdom recommends you enjoy it on the rocks or with a splash of water to bring out the nuances of the subtler style. Here are some ideas to get you started.

Formed in 2003 by childhood friends John O'connell, Ger McCarthy and Denis McCarthy, their early years were spent barely making ends meet, trying to perfect their craft. Sustained by passion, skill and a mission statement dear to their hearts; wanting to make Irish whiskey accessible, while maintaining their Irish history and tradition. Today, West Cork is the largest wholly Irish owned distillery in the country. The Bourbon Cask has aromas of citrus apple and nutmeg with a smooth and balanced body exhibiting notes of malt, cracked pepper and slight citrus zest.

Pearse Lyons Distillery at St James was born out of a personal passion for brewing, distilling, the entrepreneurial spirit and a deep rooted family connection to the Liberties. Husband and wife team Deidre and Pearse Lyons actually got their whiskey whistle whetted in Kentucky, where they first started distilling in the late 70’s, returning to Ireland to open Pearse Lyons Distillery in 2017 as a way to reconnect with the familys’ roots. The 5yr single malt is something of a historic milestone as it is the first 5yr Irish whiskey to appear from a new distillery in the whole of Ireland in more than 25 years. On the nose the whiskey is light and malty, with hints of fresh oak, zingy citrus, vanilla, biscuit and clove spices.

Sean Muldoon & Jack McGarry were already big names in the international cocktail scene when they decided to move their base from the Merchant Hotel in Belfast to a two story space in downtown Manhattan. Since then, they've won accolades for World's Best Bar and more. After dealing with a fire recently, they're back at it, and this blend of whiskies celebrates the 5 years they've been at their Manhattan space, through better and through worse.

In the 1800s, Mitchell & Son was the place to go for tea, confectioneries and cakes on Grafton Street in the heart of Dublin. Their reputation even earned them royal warrants and the title of “Confectioner to Her Majesty.” The family business began as a confectionery and bakery in 1805, taking a cheeky turn into wine importing and finally whiskey bonding in 1887. The Mitchells matured their whiskey in casks under the streets of Dublin in their network of underground cellars. When their fortified wine casks were filled exclusively with Jameson spirit from the old Bow St. Distillery, they were marked with a daub or ‘spot’ of paint which identified how long the barrels would be matured for. Blue for 7 years, Green for 10 years, Yellow for 12 years and Red for 15 years—hence the name Spot Whiskey.