Maple It Up As You Go: Maple Syrup Day Favorites

The colder months boast a lot of flavors we look forward to all year, but one of the most iconic of all is maple. From pure spun maple candy to maple-glazed hams in the center of the holiday table, maple is a versatile ingredient! Beneficial minerals mean that it even includes more nutrition than your average natural sweetener, and athletes often add maple syrup to their water for a carbohydrate energy boost. With this many pros under its proverbial belt, it’s no wonder there’s a day just for celebrating maple syrup! That's why we've made a list of all our maple favorites. 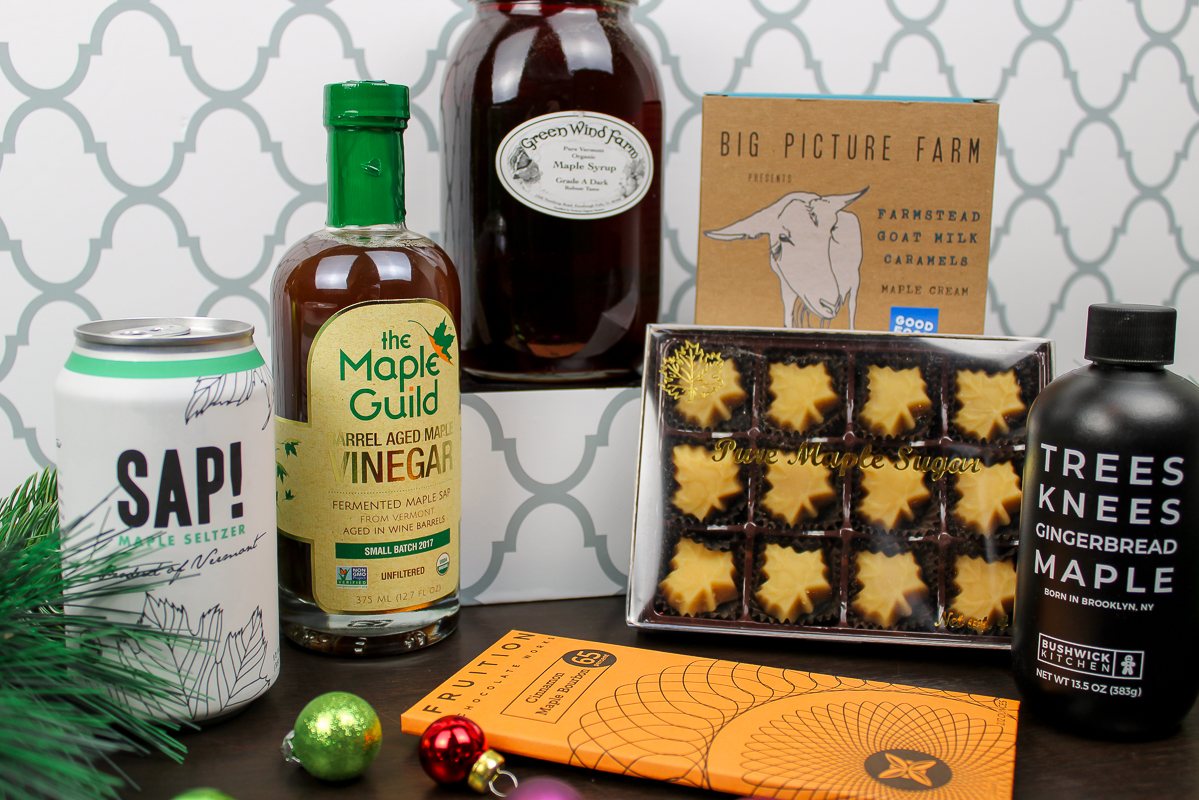 We’ve given Passamaquoddy a mention earlier this year, but their maple syrup products are so good we want to give them another shout for Maple Syrup Day. Made from sustainably tapped maple trees growing on Passamaquoddy-owned land in Maine, getting your maple fix has never been quite so cute. This Maple Moose is an ideal stocking-stuffer—or treat for yourself—and this gift box of miniature Maple Leaves is elegant enough for anyone on your gift list.

Move over, ACV, there’s a new vinegar on the shelves—and it’s made with maple! The Maple Guild, based in Island Pond, VT, prides themselves on innovative ways to use maple sap. They began in 2015 by steaming organic maple sap instead of boiling it, which leaves in so many more of maple’s natural flavor notes. Once they were bottling up the resulting golden syrup, they knew they couldn’t stop there. The Maple Guild naturally fermented and aged their maple sap in California wine barrels, and the result was this Organic Maple Vinegar that will amp up any dressing, marinade, or sauce.

A little can of seltzer with big flavor, Sap! Maple Seltzer promises more than just a refreshing sip. Sap! is a fizzy upgrade to the maple water favored by athletes. Maple sap provides just the right amount of natural sweetness, but it also boosts this drink’s nutrition! It’s packed with electrolytes, prebiotics, and even antioxidants, and even has a low glycemic index.

These Trees’ Knees Maple Syrups from Bushwick Kitchen have been on our shelves for a good while now, and with good reason! Bushwick Kitchen infuses organic maple syrup from the Catskills with flavors you can’t help but want to taste, like coffee or chili peppers. The snowy season in particular has us in the mood for their Gingerbread Maple Syrup, infused with a perfectly balanced blend of cinnamon, ginger, allspice, nutmeg, cloves, and black peppercorn. Pour this over snow day pancakes, onto vanilla ice cream (we know it’s overheated in all our apartments), or even into a marinade for some hearty pork chops.

Green Wind Farm Maple Syrup has been on our shelves even longer—over ten years! The syrup is bottled by Pumpkin Village (maker of some of our favorite honeys) at Green Wind Farm in Vermont, and the whole thing is a tight-knit family operation. Green Wind Farm has been owned and operated by couple Julie Wolcott Steve MacCausland since 1979; Pumpkin Village is how their son Seth distributes the farm’s maple goods, among other locally-produced Vermont foods like this Maple Leaf Candy, or even our new favorite cider from Champlain Orchards.

This seasonal chocolate bar from Fruition won’t be around for long, so enjoy it while you can! Fruition’s Cinnamon Maple Bourbon Bar is made in upstate New York with cocoa nibs aged with cinnamon and locally distilled bourbon, then refined with local Mount Mansfield maple sugar. Mount Mansfield is a long-standing Vermont sugaring institution, producing certified organic maple syrup with a resource-efficient approach, always working at reducing their energy consumption in producing their syrup. At 65%, this dark milk bar is the perfect balance of flavors for all fans of chocolate, with a seasonal twist that will have everyone feeling nostalgic and cozy.