Let’s be honest: Ice cream is not a seasonal food. We eat it in spring to welcome warmer weather. We eat it in summer to cool off. We eat it in fall because we don’t want to let go of summer, and we eat it in winter because the heat is cranked in our apartments.

It’s also one of the most versatile foods! From the simplest vanilla bean ice cream to the most unexpected spices and mix-ins, from a scoop on a waffle cone to milkshakes to floats, we keep finding more ways to enjoy one of the most popular desserts worldwide. While our freezer at Greene Grape Provisions is chock full of plenty of great choices, we understand if it’s a little overwhelming. In honor of National Ice Cream Day on July 19th, we’ve put together this ice cream guide. Happy scooping! 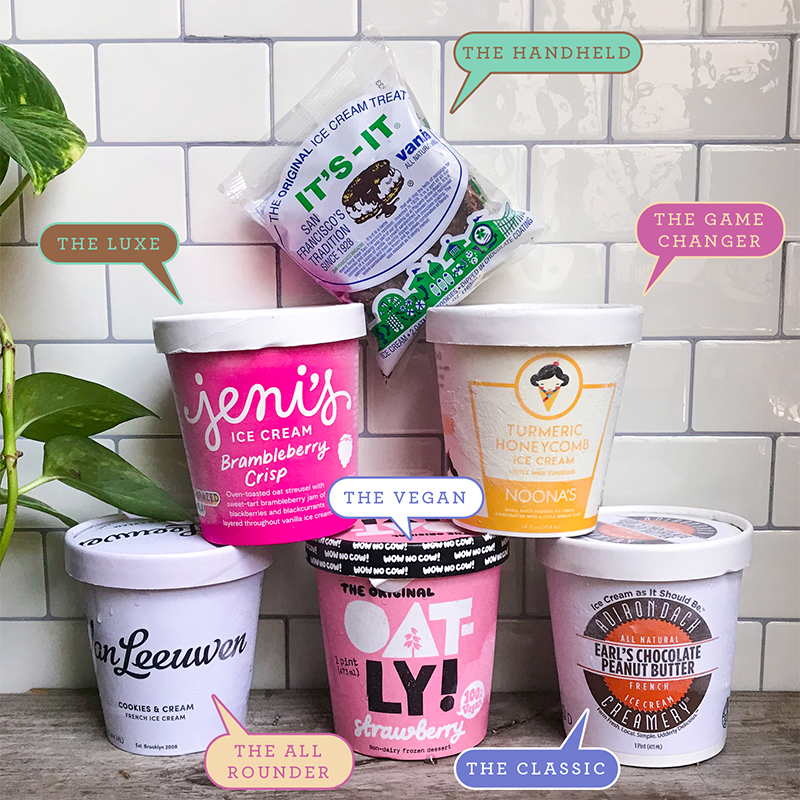 Stocked in our freezer since we first opened our doors down the street in 2008, Adirondack Creamery is our go-to for straightforward, cow’s-milk ice cream with great flavor. Made—as the name would suggest—in the Adirondacks in upstate New York, Adirondack Creamery partners with nearby family-run Boice Bros. Dairy so high quality milk (from happy cows with a diverse diet) is never far.

Jeni’s Splendid Ice Creams only needs introducing to the uninitiated. Regulars have nicknamed Jeni’s the “Rolls Royce” of ice cream, and for good reason! While its price point is nothing to sneeze at, there’s also nothing about Jeni’s that isn’t worth it. Top-shelf milk from grass fed cows, local to their facility in Ohio where their business all began, is the base for a carefully made product that includes countless inventive flavors. Their roster of seasonal flavors changes every year!

Noona’s Ice Cream is a sleeper hit in our freezer! This Brooklyn-based creamery carefully vets the upstate dairy co-ops and producers it uses for milk and ingredients, making their ice cream in small batches. They bring classic East Asian flavors like green tea and black sesame alongside their own twists, like a bright turmeric ice cream blended with house made Korean-style honeycomb (ppopgi).

What can be said about Oatly that hasn’t already been said? Oatly is the non-dairy milk that swept the nation and continues to do so, so it was only natural they would try their hand at a frozen dessert. The result is a custardy, perfectly scoopable, delectable treat that would fool even the most steadfast cow’s milk ice cream fan. While there aren’t many flavors yet, each one is so flavorful you won’t mind the wait while Oatly devises their next release.

NYC-based Van Leeuwen is practically a household name in Brooklyn, and their approach is a simple one, quite literally! Each take on pure, whole-ingredient flavors like chocolate and strawberry are pushed to their flavor limit, so that it’s not just strawberry ice cream, it’s the best strawberry ice cream. They don’t leave nondairy friends out in the cold, either, with plenty of vegan offerings, made with cashew, coconut and oat bases.

It’s-It is a fixture of many Bay Area childhoods, with an origin dating back to 1928 when it debuted at Playland At The Beach, San Francisco’s own Coney Island. Despite a business that has grown by leaps and bounds over decades, all of It’s-It’s production is still local to Northern California! What sets this ice cream sandwich apart isn’t just its long history, either. Two old-fashioned oatmeal cookies—don’t worry, no raisins—hold together more ice cream than you would think possible, coated in a thin layer of dark chocolate. All together, it makes for a totally different ice cream sandwich experience.

Recommended Flavor: Vanilla, but eat it as soon as you get it!