We’re proud to shout out these Black makers and producers during Black History Month—and all year round. We’re even prouder to say that we’ve expanded our selection of Black-owned products, and are dedicated to continuing this work, because we recognize there’s a long road ahead to true equality. As we head into the future, we look forward to bringing more Black producers and other producers of color to our shelves, and we hope you’ll enjoy those products as much as we do. 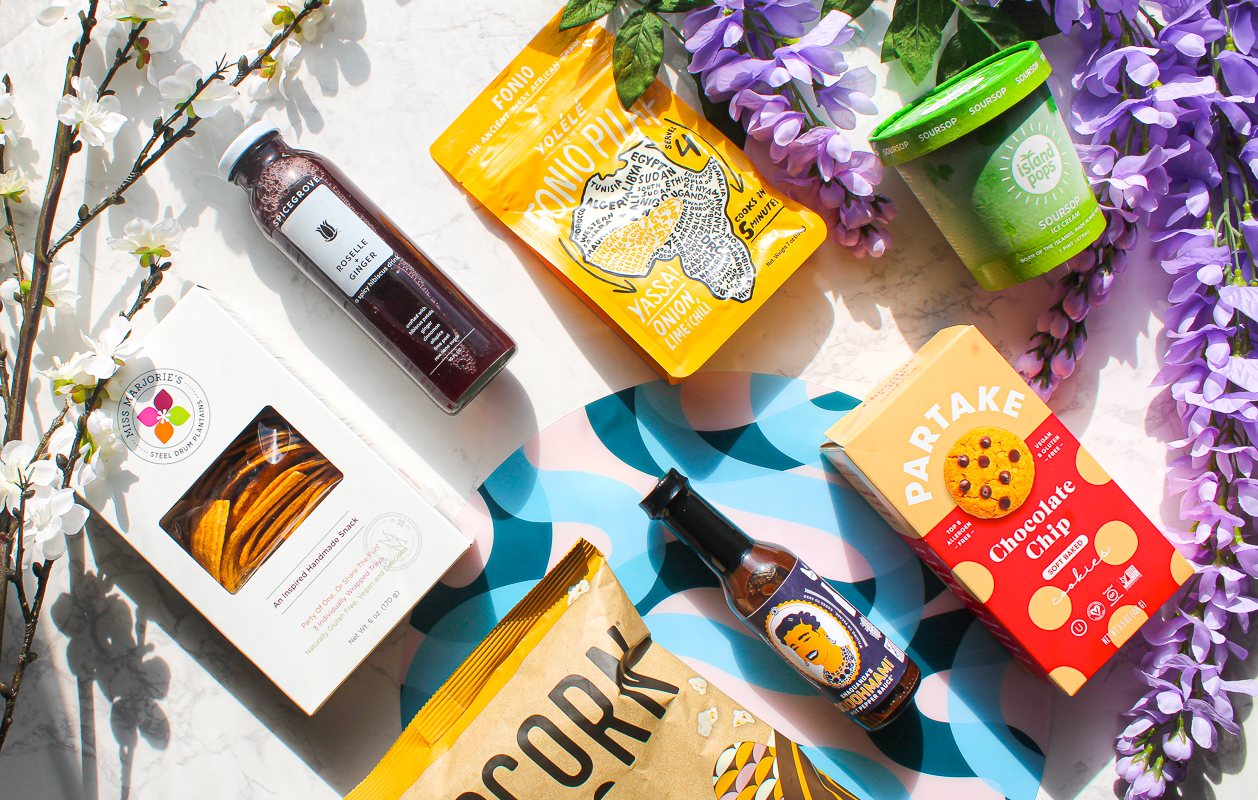 One of our perennial favorites, Spicegrove Roselle is brewed and bottled fresh in New Jersey, with flavors paying homage to founder Audrey Powell’s Jamaican roots. This spicy, refreshing sorrel drink blends roselle hibiscus with raw ginger, allspice, cinnamon, and lime peel, sweetened with cane sugar. It’s somehow just as perfect for cooling off in the summer as it is for warming up when it’s chilly, and doubles as a mixer for an invigorating cocktail.

It’s hard to say there are *bad* plantain chips out there in the world, but it’s incredibly easy to say that Miss Marjorie’s might be the best we’ve ever tasted. These chips are the signature snack at the Seattle restaurant of the same name, named for owner Donna Moodie’s Jamaican mother, whose passion for cooking from scratch with only the best ingredients inspired the restaurant’s founding. (Psst: They even offer the recipe for the dip they serve with their chips!) The chips are sold out at the moment, but we have a restock on the way!

New to our freezer is Island Pops, Caribbean-inspired ice creams made in Crown Heights by couple Khalid Hamid and Shelly Marshall. Like many expats coming to any country, Khalid and Shelly missed the flavors of their home in Trinidad. As a matter of fact, the story behind Island Pops is so good we just had to ask Shelly all about it—and she delivered in this Q&A. Island Pops has plenty of flavors to choose from, but we managed to choose four favorites for their debut. Soursop, also known as guanabana to Spanish speakers, is a tart yet sweet flavor that started it all for Island Pops; Passion Fruit Cake, Rum & Raisin, and Grape Nut (yes, really, and we promise you’ll love it as much as our graphic designer does) round out the ranks.

Shaquanda’s sauces made their premiere last month in our hot sauce rundown, but they’re worth a second mention! Our grocery buyer in particular recommends the Oooohmami sauce on just about any rice dish.

When Partake founder Denise Woodard’s infant daughter was diagnosed with severe food allergies, she discovered that tasty, healthy snacks her child could have were in short supply. She set out to fix that, and fix it she did, with cookies that run a laundry list of allergy-friendly traits: Dairy-free, soy-free, egg-free, nut-free, as well as free of preservatives, GMOs, and artificial flavors. Biting into a Partake cookie, though, you’d never guess they missing so many “standard” cookie ingredients; these soft-baked cookies are almost too easy to wolf down. Choose from classic chocolate chip, rich triple chocolate, or cookie butter.

Pipcorn marks its return to our shelves with their two most popular flavors! (We’re particularly stuck on the Truffle Popcorn.) Back in 2012, a mid-move snacking session led to a revelation; the tiny popcorn kernels co-founder Jen Martin had bought at a local health food store were the best any of the three founders had ever had! They liked it so much they sourced those kernels right back to the Indiana farmer who grew them, and the rest is history. Those tiny kernels are exactly what sets Pipcorn apart, made from heirloom corn with a naturally smaller size. What that means is Pipcorn’s popcorn is crunchier, more flavorful, and even more nutritious than your run of the mill popcorn. Even the hulls are smaller and thinner, so you won’t pay for noshing now with popcorn stuck in your teeth later.

Repackaged in new, eye-catching colors, Yolélé is a return producer as well, and we couldn’t be happier to welcome them back! Fonio, a West African grain, is coming for quinoa’s throne when it comes to nutritious quick-cooking grains. Yolélé co-founder and president Chef Pierre Thiam has a vested interest in spreading the word of fonio, and even wrote a fonio cookbook! High in fiber, protein, and amino acids, fonio also happens to be wildly flavorful, with a nutty taste and a texture somewhere between quinoa and couscous. And because fonio is a little new to some folks, Yolélé made it even easier to whip up an easy weeknight fonio dish in under five minutes with their fonio pilafs! Choose from Senegalese-inspired Dakar Curry or Yassa Onion Lime & Chili, or the deep umami flavor of their Afro-Funk blend.