For many, January offers a great opportunity to reset and refocus on one’s health and wellness. That’s cool. And we’re not going to lie to you―alcohol is not a health food. However, drinks have been linked with wellness since the dawn of time. In fact, booze has been used to treat everything from insect bites to epilepsy, migraines, and even the plague. In ancient Persia, for example, alcohol was even used as an anesthetic.

If you’re feeling a little off this first week of 2021, it may be due to a holiday hangover or just agita related to the nightly news. Don’t worry, we’ve got a great lineup of amari that’s sure to soothe. In Italy, amari were traditionally used to treat stomach ailments and occasionally, hangovers. (We hear they’re less helpful for civil unrest.) 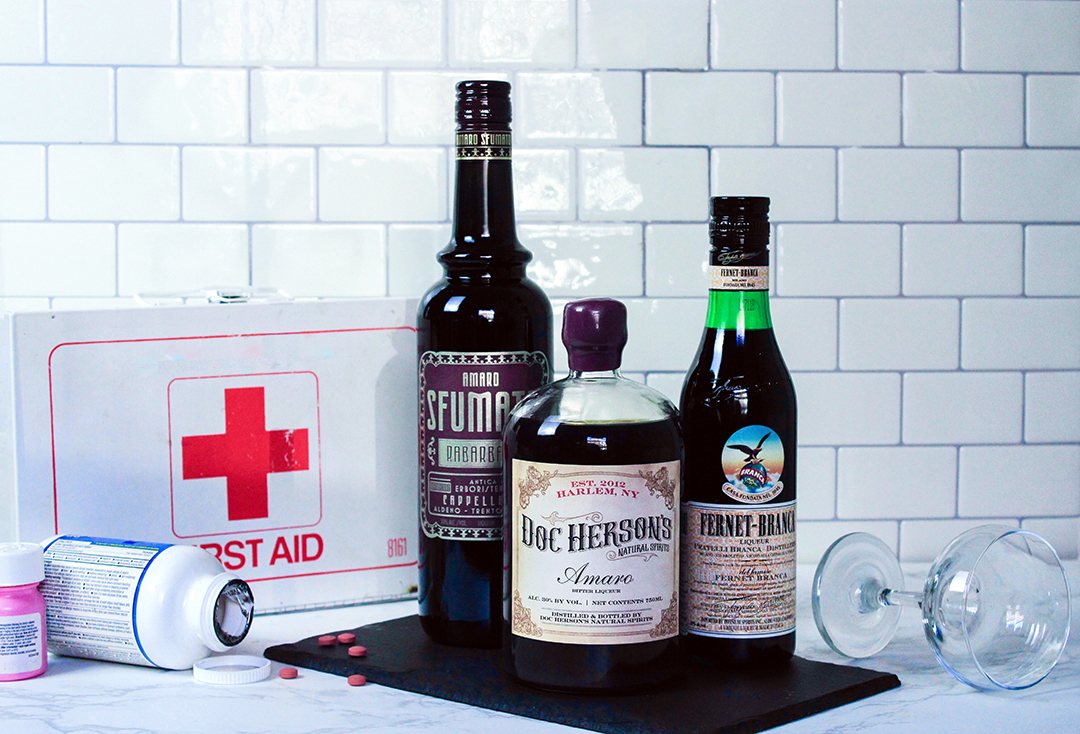 What is an amaro anyway? The word comes from the Italian word for “bitter,” and refers to a traditional Italian liqueur produced by macerating herbs, roots, flowers, citrus peels and even tree bark in a neutral spirit, such as brandy, or wine, occasionally with the addition of honey or a sugar syrup. Once upon a time, amaro was consumed as a digestif, after dinner,  to assist with digestion, especially after a rich meal. The combination of soothing herbs and a “hair of the dog” was also found to be helpful following particularly festive evenings, which is how it came to be known colloquially as a hangover cure. These days, we know better ― water and moderation are the best ways to avoid a hangover ― but there’s still a place in any medicine chest ― er, we meant any home bar― for amari. Here are a few of our faves:

Known worldwide for its intense peppermint notes, Fernet has been around since the nineteenth century. Originally marketed as a cure for cholera, stomachache and nervous disorders, today’s Fernet-Branca is the same recipe it was generations ago (27 herbs and other botanicals, though the exact recipe is held under lock-and-key). Also known as the bartender’s handshake, odd’s are you’ve seen at least one bar professional slam a shot near the end of a long shift. Here is another cocktail idea: Sometimes called a Fernando, Coca-Cola and Fernet-Branca is an extremely popular hangover cure, especially in Argentina. Maybe, it’s the air of mystery surrounding both the recipes for both Coca-Cola and Fernet, as well as their individual histories that make this sweet, bitter and herbaceous blend that make them natural partners in hangover-busting crime.

This doctor’s got the cure to what ails ya! Founded in Harlem, and now located on the West Coast, Doc Herson’s is the producer of natural botanical-infused spirits, including absinthe, liqueurs, and of course, amaro. Inspired by classic recipes this amaro definitely brings a taste of the old world to your glass, with contemporary twists, including Turkish rhubarb, myrtle leaf, bitter orange and black cardamom. Complex and well-balanced, this is great on its own mixed into a cocktail with Something & Nothing’s Hibiscus Rose Seltzer or Cucumber Seltzer, and lemon juice.

Sfumato is sort of an interesting amaro, its primary ingredient is Chinese rhubarb so it has a unique ability to impart this smoky-woodsy taste with none of the tannin or harshness associated with wood smoke. It’s dark, brooding, a little sultry and exceptionally well balanced, everything we wish we could be in a glass. If you’re scratching your head over what to do with those half empty bottles of Champagne littering your apartment - you’re in luck. Cappelletti's Sfumato Amaro blends superbly into a little Champagne (no more than an ounce or two), topped with tonic and a slice of lemon for an extra boost of vitamin C.

For a hangover cure that feels more like a spa treatment, try something beautifully crafted and a little different. A Brooklyn native, just like us, St Agrestis produced by a small, local team (seriously its three guys doing exceptional work) with a passion for amari and aperitifs. The two brothers in charge of production, Louie and Matt Catizone, pay homage to their roots in Italy and Brooklyn with this unique amaro, made from more than 20 herbs, spices, roots, seeds, citrus peels, and flowers. Each component is individually macerated, and carefully blended then aged in used bourbon barrels for sixteen weeks. This is the spiciest amaro on our list and we love it simply over ice, maybe with a dash of plain seltzer, for even the most delicate of palates can appreciate the bracing freshness and perfect balance.